What I would have done differently 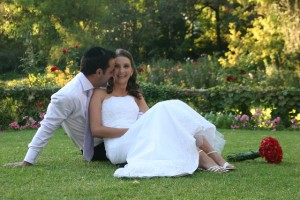 As many will argue (and most of us will agree), weddings tend to revolve mainly around the bride. With this in mind, we asked several happily married women to share with brides-to-be what, given the chance, would have changed about their wedding day.

What I would have done differently:

“With hindsight, I should have thought through the timing of events more carefully and had my wedding ceremony a lot earlier. This would have allowed more time for us to take part in the evening’s festivities, which sped by much too fast.”

“Instead of trying to do everything myself, I would have delegated more to trusted people.”

“I would not have skimped on the photographer and videographer, as the photos and videos (or DVDs) are what you will be looking at in 10 or 20 years’ time, to remind you of that special day.”

“I would not have spent half the night going from table to table to say ‘Thank you’. You can thank everyone as part of your speech, but it seems a waste doing the dutiful thing while most of your guests are enjoying themselves on the dance floor without you! After all, the reception is mainly about the two of you, so allow yourselves time to enjoy it. As it is, the night seems to fly by and before you know it, the DJ is playing the final song.”

“I would have enlisted the aid of a hairdresser and a make-up artist instead of doing it all myself, and then worrying that the result wasn’t good enough.”

“Although I was dead against them at the time, I would have had a wedding gift list (even an informal one) for those guests who asked for ideas. That way, maybe we wouldn’t have landed up with 12 wooden salad bowls!”

“I would not have let others affect my decision regarding what I wore. I know I would have felt more comfortable in a completely different style.”

“I would have tried to talk my parents out of inviting so many of their friends to my wedding, many of whom I had never met before.”

This last remark brought to mind something I read recently about the wedding of George W Bush’s daughter, Jenna, to Henry Hager. While President Bush might not be my favourite person, one has to applaud his daughter for managing to avoid the pageantry of previous weddings held at the White House. What she really wanted was a small, private family affair at their 1600-acre family ranch. I was told that she had 200 guests and 14 women attendants, hardly a small wedding in my book! But I really liked the advice she apparently gave when she appeared on the Ellen DeGeneres Show, namely that it was wise to keep the guest list limited to those in your immediate circle, because, as she said, “I definitely didn’t want to introduce myself to somebody at my own wedding.” Sounds like her daddy didn’t get to invite all his chums to this wedding.