The role of the MC at a wedding 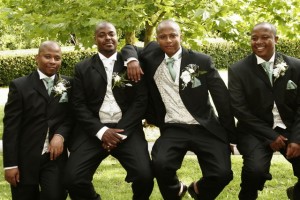 If you’re having a large formal wedding, it’s worth having a Master of Ceremonies to help the function flow smoothly. The MC is usually a friend of the bride’s family, or could be the best man himself.

The role of the Master of Ceremonies is to ensure that everything runs according to plan. He should therefore introduce himself (before the reception) to all the important service providers at the wedding: the photographer, videographer, musicians, venue host etc.

If there are any hitches during the reception, they need to know who the MC is, as he’s the one they will turn to for guidance. It is his job to welcome the guests and keep them informed of what is taking place, for example when the meal is about to be served, or when the bride and groom are getting ready to cut the cake.

He will also introduce each speaker, and it is his duty to ensure that important people (like the photographer, videographer and band) are kept informed of what is about to happen.

It is the MC’s role to maintain a good ambience throughout the evening and whilst the occasional joke would help, it’s advisable to spare the happy couple the embarrassment of any vulgar or risque anecdotes.

It is always a good idea to discuss the timing of the speeches at your wedding in advance with your venue or caterer, so they know when to serve the food. It has become quite a popular option to treat the snacks served with the drinks as the first course. If you have followed this practice, you can then go straight into the speeches (if preferred).

Although at some weddings many more folk make speeches, the order of speeches is generally as follows:

The first task of the Master of Ceremonies is to announce the arrival of the bridal couple at the reception and to ask all the guests to stand. Once the couple is seated, he will welcome the guests and advise them of the course of events for the evening.

At the agreed time the MC will then either make a short speech and propose a toast to the bride and groom, or call on the person who is performing this duty.

Sometimes the bride’s father proposes the toast to the bride and groom, but some fathers are so overcome with emotion that they have to battle their way through the speech. It may be kinder (and safer) to give the task to a close family friend or relation.

Next, the best man (who also reads emails from guests unable to attend), proposes a toast to the ‘beautiful bridesmaids’, as well as any other attendants, and talks about his friendship with the groom. It is also his duty to check with the bride’s parents in case any late emails or messages have been received.

If the bridesmaids are making speeches, they would then follow and talk about their friendship with the bride.

Next comes the groom’s speech, which is usually one of thanks to everyone for being there, especially guests who have travelled a long way to do so.

He also thanks the bride’s parents, his parents and all who have contributed in whatever way to make the day special.

He then proposes a toast to the parents (a nice touch is to include any grandparents who may be there). At this point, couples sometimes present their mothers with a gift or a bouquet of flowers.

The groom then proposes a toast to his beautiful new wife, after which the bride (once she has dried her eyes) has the option of having the last say – like the groom’s speech, this should include thanking all the special people in her life.

While it is a good idea to have a videographer record your special celebration, if for any reason you are unable to do so, don’t forget to record the speeches, as this is something often forgotten about and regretted later.