The legal side of weddings 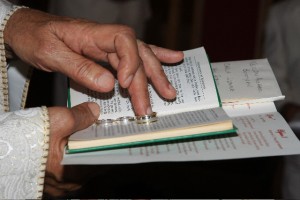 Many newly engaged couples, viewing their upcoming nuptials with stars in their eyes, sometimes need reminding of the fact that marriage is a binding contract and a serious, lifelong commitment. If it doesn’t work out, the consequences are devastating – and costly. As I’ve mentioned before, in marriage there is no 30-day ‘cooling-off’ period or money-back guarantee! It concerns me when I see couples putting all their energy into planning their reception, and living only for the big day, with scant thought being given to their lives together after the honeymoon.

By signing the register on your wedding day, you are entering into a legal partnership and there are certain requirements you will need to attend to before your wedding, to ensure that your marriage will be valid in the eyes of the law.

It is quite simple to marry in this country; all the bride and groom have to produce is a valid passport or identity document. If you don’t have a South African identity document, you will need to complete a simple affidavit called a B1-31. All Marriage Officers are Commissioners of Oaths and are competent to complete this affidavit with you.

If previously divorced, you will need the divorce order and if widowed, the death certificate of the late spouse.

I am often asked about when you can marry, e.g. time of day etc. The short answer is that as long as you can find a competent Marriage Officer willing to accommodate you, 24/7 and 365 are permissible. There is nothing to stop you marrying at midnight on a Sunday, if that’s what you want!

It is also very important to note that in South Africa, if no ante-nuptial contract is signed prior to the wedding, you are automatically married in community of property. In layman’s terms, this means that all property owned by either spouse becomes part of the joint estate upon marriage, whether it is theirs at the time of the marriage or is acquired by them after the wedding.

The downside of marrying in community of property is that, should either of you face bankruptcy during the course of the marriage, your joint estate is vulnerable to the claims of your creditors.

Over the years I have met many couples who refuse to have an ANC on the basis that a) they are never going to divorce and b) they plan to always share everything.

This may sound very romantic, but it is not only your assets that are jointly owned – you are also liable for each other’s debts. The last thing you want to do is to put your family home at risk, yet couples marrying without an ante-nuptial contract often fail to grasp that this is just what could happen if one of them should decide to start a business venture which fails, because at the end of the day, they will both be liable for any debts incurred. At the start of your marriage you may have no plans to start your own business, but who knows what might happen 10 years hence.

If you decide after the ceremony that you would have preferred to have had an ANC, you will require a High Court Application, which is very costly. In addition, you will be expected to produce a valid reason as to why you did not conclude an ANC before your marriage.

If you are a South African female marrying someone from a foreign country, bear in mind that the law of your prospective husband’s domicile (his home country) at the time of the marriage, applies – both during the marriage and on dissolution. Some countries will only ever apply their own law, notwithstanding the fact that the parties desire their marriage to be governed by the law of the country where they were married. In these instances it is best to contact an attorney prior to the marriage to enquire about your legal status.

I have also been concerned by the number of e-mails I have received from South African couples living in the UK who, when marrying in that country, incorrectly assume that they are married by British law (out of community of property) and who discover to their dismay after the wedding that they are married by South African law, which is in community of property. If you want to avoid all this, it is essential to visit an attorney prior to your marriage.

As will be evident from the above, one should never overlook the importance of an ANC, as its main aim is to protect you – yet a poll conducted on our website revealed that 31% of couples were not planning to enter into an ante-nuptial contract before their weddings.