Should I keep my maiden name?

I have always been impressed by the actions of the formidable American abolitionist and suffragette, Lucy Stone, who, when she married Henry Blackwell way back in 1855, refused to take his name. According to the American laws that applied at that time, upon marriage, women lost their legal rights and to all intents and purposes their property was regarded as the property of the husband. Lucy became the first married woman in America not to assume her husband’s surname, and ever since, women who follow her example are said to be adopting a ‘Lucy Stoner’

If an interesting new study carried out by Facebook is anything to go by, there are an increasing number of Lucy Stoners in Britain! The Facebook study showed that of their 33 million UK users a third of married women in their twenties had decided not to adopt their husbands’ surnames but to rather retain their maiden names. 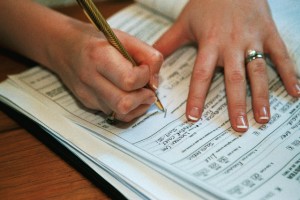 There is certainly nothing to prevent you from retaining your maiden name in South Africa. There is no special permission required nor anything that you need to do, as you are not obliged by law to take your husband’s name, This is in fact quite a common practice amongst professional people such as doctors, attorneys and reporters who have built up a reputation under their maiden names which they do not wish to lose. In practical terms it is also a lot less hassle as you don’t have to go to the bother of changing ID books, passports, bank accounts etc. Production of your identity document in your maiden name, together with a copy of your marriage certificate, should be sufficient to satisfy any bank etc.

It’s advisable to discuss your preference with your Marriage Officer who will then make the necessary arrangements.

Brides who choose not to adopt their husband’s surnames will, however, usually register any children they have under the father’s surname. They could also follow the example of Lucy Stone whose daughter Alice Stone Blackwell was given the surnames of both parents.

It has become very popular for brides to choose to join their maiden names with those of their husbands. One has only to take note of the names of many of our female politicians and TV celebrities to realize the popularity of double-barrelled surnames in South Africa!

If you have always disliked your maiden name, taking on your husband’s surname can however sometimes be a blessing in disguise.  I was once one of the judges in a Win-a wedding competition and this was one of the reasons an entrant gave for wanting to win the prize!

It is not only brides who are changing their surnames it’s become popular amongst the grooms as well.

Someone who has always been regarded as being ahead of his time, was John Lennon and a little known fact is that after his marriage to Yoko Ono in 1969, he changed his name by deed poll to John Winston Ono Lennon. He was quoted as saying: ‘Yoko changed her name for me, I’ve changed mine for her. One for both, both for each other.’

More recently, after his marriage to singer Beyonce Knowles, rapper Jay-Z changed his surname to Knowles Carter as apparently there was no one in Beyonce’s family to carry on her family name.

While many brides are keen to use their new title, if you are planning to fly anywhere on your honeymoon, it is important to note that you must book your air tickets in your maiden name. Due to the time constraints, it is impossible to go on honeymoon immediately after your wedding with your passport in your married name as the Department of Home Affairs will not issue you with a passport in your married name until after the marriage. Because the name on the air ticket must be the same as the name in the passport you will need to book the ticket in the name that appears in the passport.