Featured in the news recently was the wedding of Sir Richard Branson’s son, Sam to Isabella Anstruther-Gough-Calthorpe. The couple, being lovers of both nature and the bush, decided to tie the knot at one of their favourite places – Ulusaba, Sir Richard’s Private Game Reserve, in the Western sector of the Sabi Sand Private Game Reserve.

What was important to the couple was having their families and friend share in something they love and guests were invited to join them for a 5-day safari in the African bush.  In addition to the expected game drives and animal spotting, guests were also treated to fun events like an African inspired fancy-dress dinner, drumming sessions and even their interpretation of a bush Olympics consisting of traditional African spear throwing, sack races, tug-o-war and more. They were fortunate to have Professor Brian Cox, physicist and UK TV presenter as one of their guests and while dining under the stars the guests were enthralled with the talk he gave about the wonders of nature, life and the universe. 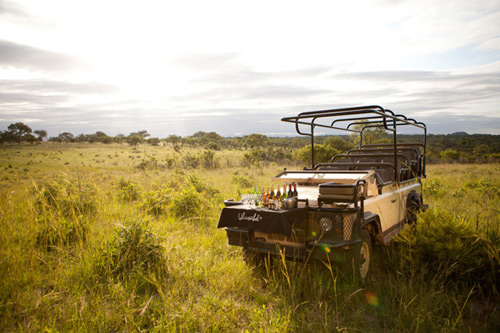 The international magazine, Hello, was granted the exclusive rights to the wedding with the couple donating the proceeds from this to a variety of charities including those involved in conservation in this country.

The fun-loving couple put a lot of thought and planning into their wedding and while ensuring that they remained true to themselves and that their guests had a good time they also considered and respected the environment.

Several of the guests, like the Princesses Eugenie and Beatrice, were no strangers to South Africa and I have no doubt that they and any newcomers to the African bush returned home with lasting memories of our country.

What we liked about this safari wedding:

a) By choosing to marry at such a beautiful spot situated on the edge of a hill and offering stunning views all around, there was no need to have elaborate décor but rather to let the beauty of the setting speak for itself. The setting sun glittered against the quartz crystal on the ground.

b) Wedding favours for the guests were bags of quartz crystal from the area where they had exchanged their vows.

c) At every opportunity the couple introduced fun into the event. By all accounts the well thought-out ceremony was very moving and to lighten the event and set the tone for the reception they made their grand exit to the strains of The Lion Sleeps Tonight down a line formed by their guests who were holding candles and showering the couple with petals.  As Sam Branson so aptly said to Hello magazine: “Who can resist singing along to ‘Wimoweh’?”

d) Giving back to the community:

e) Their concern for the environment:

A wedding in a game reserve (or elsewhere in the bush) is a romantic option and if this is what you are planning, we recommend that you check whether you need to take malaria tablets in the region you will be visiting.  Some game reserves (such as those in the Western Cape) are malaria free. In a malaria region, avoid wearing perfume or after-shave and wear long sleeves and long trousers at night.

If you are planning a safari honeymoon, remember to pack clothes in neutral colours – brown beige or khaki – for game drives

When booking a venue in the bush, ask if they are able to assist you with finding recommended service providers for your wedding. This is especially important if you need the services of a Marriage Officer (or a make-up artist and hairdresser), as there might not be anyone suitable in the area and you may have to include their travelling costs in your budget.

As with any outdoor wedding, it is always advisable to have a Plan B in case of any bad weather. Also take care choosing the time of the ceremony. The Branson couple married at sunset, in the cool of the day, which meant their guests were not subjected to sitting outdoors for long in hot sunshine. If the wedding is earlier in the day it’s a good idea to provide shade or parasols for your guests.

Last word: make sure your wedding cake is out of sight of wild animals.

Sam and Isabella’s cake ended up being eaten, not by their guests but by an elephant that arrived late in the night – fortunately when most of the guests weren’t around!