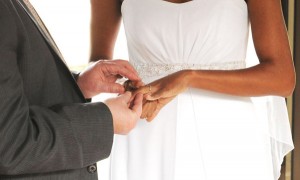 It’s spring – usually referred to by professionals in the wedding industry, as the start of ‘the wedding season’ as the months between now and the end of April are the most popular ones for weddings.

I am often perturbed when I see couples putting all their energy into planning their reception and failing to realize the importance and significance of the vows they will be taking at the ceremony.

This major decision in life is not something that should be taken too lightly as marriage is a binding contract and a serious lifelong commitment.

Unfortunately, this is one contract where you will have no recourse to the newly introduced Consumer Protection Act, as in marriage there is no 30 day ‘cooling-off’ period or money-back guarantee . If it doesn’t work out, the consequences can be devastating and costly!

Couples embarking on this life-changing path are advised to consider the legal side of their union and to take the necessary steps to ensure it is valid.

MAKE SURE YOUR UNION IS LEGAL

As with any legal agreement, there are certain requirements you will need to attend to before your wedding to ensure that your marriage will be valid in the eyes of the law. The South African Marriage Act lays down all the rules that regulate how a marriage should be solemnized, who may marry one another, as well as where and how the marriage may be conducted, and by whom. If you fail to comply with the regulations set out in this Act, your marriage could be declared null and void, which is obviously something you do not want to happen.

WHERE AND BY WHOM

After the bride and groom, the most important person at the wedding is the Marriage Officer as, according to the Act, only a Marriage Officer may conduct a marriage. It is advisable therefore to book his services early as you don’t want to run the risk of having no one available to marry you.

Also according to the Act, the ceremony must take place in a church or other building used for religious services, or in a public office (such as The Department of Home Affairs), or in a private dwelling. During the service the chosen venue must have ‘open’ doors and the service must be conducted in the presence of the parties themselves and two witnesses. A marriage conducted without two witnesses is not considered legal, so bear that in mind before you decide to elope quietly to a deserted beach!

If you are marrying outside on a beach or in a garden, it is best to repeat the legal part of the service indoors so as to avoid any doubt as to whether you are formally married or not. However, as long as your marriage is solemnised by a competent marriage officer, the courts are not readily inclined to declare a marriage invalid simply because if was held in the wrong place.

I have often been asked about when you can marry, i.e. time of day, etc. The short answer is that as long as you can find a competent Marriage Officer willing to accommodate you, there is nothing to stop you marrying at midnight on a Sunday if that’s what you want!

If you are planning to write your own vows, you need to bear in mind that according to the Marriage Act, certain statements need to be included. A solemn declaration stating that the couple are free to marry, must be spoken during the marriage ceremony by both parties in the presence of the Marriage Officer and two witnesses.

The groom must solemnly declare that he does not know of any lawful impediment to marrying his bride and must call upon the persons present to witness that he takes her to be his lawful wedded wife, after which the bride must repeat the words, substituting the word ‘husband’ for ‘wife’.
It is a good idea to discuss your proposed vows with the Marriage Officer so you can ensure that the words you plan to say are legally acceptable and binding.

It is also very important to note that in South Africa, if no antenuptial contract is signed prior to the wedding, you are automatically married in community of property In layman’s terms this means that all property which is owned by either spouse becomes part of the joint estate upon marriage, whether it is theirs at the time of the marriage or is acquired by them after the wedding. The downside of marrying in community of property is that, should either of you face bankruptcy during the course of the marriage, your joint estate is vulnerable to the claims of your creditors. If you want to avoid this, it is essential to visit an attorney prior to your marriage to sign an antenuptial contract.

If you are a South African female marrying someone from a foreign country, bear in mind that the law of your prospective husband’s domicile (his home country) at the time of the marriage applies – both during the marriage and on dissolution. Some countries will only ever apply their own law, notwithstanding the fact that the parties desire their marriage to be governed by the law of the country where they were married. In these instances it is best to contact an attorney prior to the marriage to enquire about your legal status.

I have always loved the wording on a poster advertising the services of a firm of attorney’s as it is profound, truthful and certainly food for thought.
It reads: ‘Marriages may be made in heaven, but they have to be lived on earth!’

We have termed September, ‘Legal Awareness Month’ and during the month, on our facebook and twitter pages and in my blog, I will be providing lots of legal advice pertaining to weddings. PLUS, we are offering couples the chance to win a free antenuptial contract from attorneys, Catto, Neethling, Wiid. Details can be found on our website www.pamblackweddings.com.