The ceremony will be held at Canongate Kirk in Edinburgh and the reception will be held at the Palace of Holyroodhouse, the official royal residence in Scotland.  Unfortunately,unlike the others, this wedding will not be televised live but I am sure it will be featured on British TV news broadcasts. 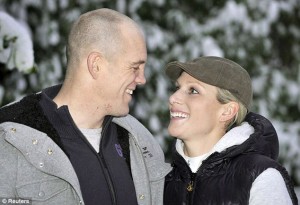 Although Zara is thirteenth in line to the throne, at the request of her mother Princess Anne, neither she nor her brother Peter were granted royal titles at birth nor are they entitled to any income as maternal descendants of the monarch.

Whilst the style of Zara’s wedding dress has not been revealed, she has confirmed that it will be made by Stewart Parvin one of the Queen’s  favourite designers.

Amongst the guests believed to be attending her wedding are her grandparents, the Queen and Duke of Edinburgh, her parents Princess Anne and Captain Mark Phillips, her brother Peter and his wife Autumn, the Prince of Wales and Duchess of Cornwall, the newly-wed Duke and Duchess of Cambridge, Prince Harry, the Duke of York and his daughters Princess Beatrice and Princess Eugenie, present and former England rugby players, family and friends. (Apparently Fergie has enlisted a stylist to assist Beatrice with her wardrobe, so it will be interesting to see what style of hat she chooses for this royal wedding!)