With much in the news recently about the extravagant Indian wedding the Gupta family held at Sun City, I found my mind cast back to Liz Hurley and Arun Nayar’s lavish Indian wedding in 2007.  At the time the wedding caused a major outcry from the British press who took the couple to task for the huge carbon footprint it had caused. According to The Independent, the carbon footprint left by their celebrations that lasted for a little over a week, was so large that it would take the average British couple more than ten years to contribute as much towards heating up the planet.

There is no doubt that a lavish wedding can have an enormous effect on the environment and what has intrigued me when reading about the Gupta saga in the press is that while much was written about the extravagance of the wedding I saw no mention made anywhere about the impact this over-the-top wedding had made on the environment. 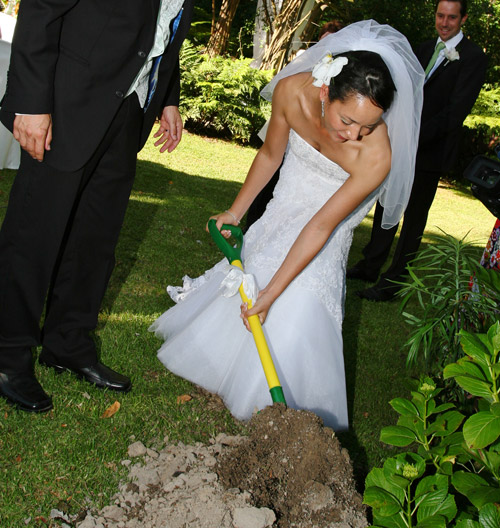 According to YOU magazine in addition to the couple’s guests being flown in on chartered flights, 130 chefs were also flown in from India to prepare the exotic meals for the wedding guests.  Flowers were imported from all over the world and fireworks lit up the sky.

Traditionally Indian weddings have always been opulent affairs lasting several days and I was interested to read in The Telegraph that India is set to clamp-down on lavish weddings and cap the amount poor families can spend on weddings in an attempt to reduce the rising debt and dowry-related crimes.  The more I looked at the details involved in the Gupta affair the more I realized just how unfriendly these lavish weddings are to the environment.

As far as I could ascertain, no mention was made of how the couple would off-set their carbon footprint or how they would give back to the local community.

By contrast, when Sir Richard Branson’s son married recently in South Africa, although the wedding was a costly affair it was organized with far less fanfare even though members of the Royal family were amongst their guests. To the couple’s credit, they off-set their carbon footprint by asking all their guests to plant fruit trees and instead of a wedding gift list guests were requested to give donations to local charities.

TIPS TO REMEMBER WHEN PLANNING A ‘GREEN’ WEDDING

The most important thing to bear in mind when planning your environmentally friendly wedding is to always think `local’ and as far as possible to use locally grown or made produce and products. Imported goods, especially if they have been flown in, have a greater impact on the environment.

Try and cut down on the use of paper and if possible use recycled paper for your invitations. If inviting guests from other countries take care when using recycled paper containing any plants or seed material as we’ve heard of invitations being rejected and destroyed by postal authorities on arrival in Australia.

Try to choose a style of wedding dress that you will wear again – instead of leaving it to clutter up your cupboard – and of course it should preferably be made from a natural fabric. This also applies when selecting outfits for your attendants.  Other options would be to hire an outfit, purchase a second-hand or vintage dress, have your mother’s wedding dress restyled or recycle something from your own wardrobe.  Word has it that this is what Hollywood star Kiera Knightley did when she recently married in the South of France. For her very low-key wedding, Kiera chose to wear a short tulle dress with a bustier top that appeared to be the same dress that she had worn to a pre-Baftas party in 2008.

Steer away from imported flowers and rather choose those that are in season and easily obtainable from a local supplier. Consider using small tubs of flowers or herbs as table décor, which could also double up as gifts for your guests. You could also give your guests packets of wild flower seeds, or products like pottery or chocolates that are locally made. Gifts that support a good cause are also suitable. One idea that has always appealed to me and that I often suggest is to make a vendor’s day and buy copies of The Big Issue to give to your guests.

If you are using fresh flowers, try not to waste them after the wedding. You could donate them to a hospital or old age home, should you not be planning to give them to guests.

Eskom is always appealing to us to cut back on our electricity consumption and a good way to do this is to make use candelabra on the tables.

Ask your caterer to ensure that only organic produce is served at your wedding reception. If red meat and/or chicken are on the menu, request that only meat that has been organically reared (using sustainable farming methods) is used.  Serve food that is in season and locally grown and not imported.

More and more organic wine is appearing on the shelves in supermarkets and bottle stores and this would be your ideal first choice. Today there are many more outlets for locally-brewed beer which would definitely get the nod ahead of imported beer

A wedding held outdoors in natural surroundings is an excellent way to reduce your footprint as it requires no artificial lighting and far less decorating. If possible, try and have the ceremony and reception at the same place or choose a setting that is convenient to most guests so that you minimise the amount of travelling required. Ideally, you should also not travel too far for your honeymoon.

If you and your guests are travelling long distances to your wedding you could consider offsetting the effects of the carbon emissions by giving your guests trees to plant. – a wonderful way to commemorate your wedding day. Where you plant the tree is your choice – whether in your new garden, at your parents’ home, at a school you attended, or in a public space that needs beautifying. What fun to watch the tree grow (like your marriage) and be a permanent reminder of your special occasion. And at the same time, you will be doing your bit to help ‘green’ the planet.

Fireworks are definitely frowned upon as are sky lanterns whose remains litter and are known to cause fires and damage to livestock.

It is not easy to have a completely carbon free occasion but even one small act by every couple marrying could have a huge effect on the planet.