There has been much speculation in the press recently regarding the upcoming second weddings of Jennifer Aniston and Brad Pitt. When they married in 2000 no expense was spared on their fairytale wedding and their 200 guests were treated to a spectacle involving 50 000 flowers, a gospel choir, four bands and fireworks. Now that they have both recently announced their plans to remarry, Brad to Angelina Jolie, and Jennifer to Justin Theroux, their fans are eagerly awaiting to see what style of weddings they will choose for their second walk down the aisle. Will it be as elaborate as their first? Is Brad really building a chapel at his French Chateau? Will Jennifer and Justin elope and marry in Mexico?

Whilst many years ago it was the norm for second weddings to be more subdued affairs than a couples first foray into marriage, over the last twenty years or so this tradition seems to have been tossed aside and second weddings are on many occasions even more elaborate than first weddings.

Sadly with the worldwide divorce rate being as high as it is not unheard of for couples to be entering into not only their second but even third marriages and what was previously known as a ‘second wedding’ is now often referred to by the Americans as an ‘encore wedding’! 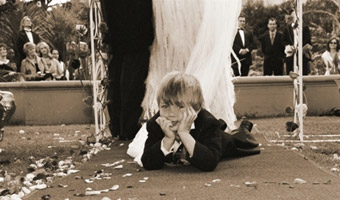 There are today definitely no rules governing what you can or can’t wear at a second wedding.  Whilst traditionally, a white dress was worn only by a woman marrying for the first time, this no longer applies and ‘encore brides’ are at liberty to wear a white gown in whatever style they choose. However, having said that, most tend to favour either pastel or cream shades.  It is also acceptable to wear a veil, although this should not cover your face, as that is regarded as a sign of virginity. Unlike a first wedding, it is not necessary to have many attendants (if any at all), except perhaps if they are your children.

Your wedding invitations can be less formal than first time around, in fact some are even a little tongue-in-cheek. I rather liked the one that included the following wording: Mary Jane ‘once is enough’ Jones and John ‘I’ll never marry again’ Smith invite you to join them in eating their words.

On the plus side, unlike a first wedding, where parents usually have a say in whom to invite, at an encore wedding, the compiling of the ennifer Aniston & Justin Theroux’sguest list is usually left the couple .

Couples who have encore weddings are generally a lot older than those marrying for the first time, and in many instances they will also have children. Most family relationship specialists agree on the fact that when the decision has been made to remarry, the first people to be told should always be your children. Even if they are happy with your new relationship, it is advisable to tell them personally and when you are on your own, without your prospective new spouse present. Only after telling them of your decision should you spread the word to the rest of your family and friends.

If at all possible, it’s also a good idea to try to include the children in as much of the planning as possible, especially on the day itself. Depending on their ages, the following are some of the ways to do so:

They could escort the bride up the aisle and stand next to the bridal couple. Young children could be flower girls, pageboys, even the groom’s best man.

If a Unity Candle is being lit, they could be included in this ceremony, especially if both bride and groom have children, as this is a good way to unite the families.

They could be asked to give a reading at the service, or a speech at the reception.

It’s also a good idea to speak to your Marriage Officer and ask his advice regarding ways to make the children feel a part of the ceremony.

Although encore weddings often tend to be more subdued affairs, there is of course no reason whatsoever not to have a large function, should you so wish. The reception at an encore wedding can be as formal or as casual as you like. Often if children are involved, the celebration usually tends to be more family-focused.

Speeches can be kept to a minimum, possibly with a good friend making a toast and the groom and/or bride replying. The bottom line is that the size and extravagance of the day depend mainly on your budget and your personal preferences.

But even if you are hosting a small celebration for a few friends, don’t overlook the importance of employing a professional photographer, rather than relying on photos taken by your guests.

However, if you feel you can’t handle a repeat of all the pre-wedding stress, one way to escape it is to follow the example of a couple who kept their wedding a secret and invited only very close family members to the ceremony. On their return from honeymoon, they broke the news to all their friends and threw a big party to celebrate.

There is perhaps one major drawback to ‘encore weddings’, which is that the couple are expected to pick up the tab, as in this instance the bride’s father is under no obligation to foot the bill!