Way back in 1840 Queen Victoria had no idea of the fashion trend she was setting when she wore a white satin gown for her marriage to Prince Albert. Until then, brides had always worn their best dresses, whatever the colour for their weddings.

I think if truth were told many brides have dreamt about their wedding dresses since they were in kindergarten.

The allure of the wedding dress is that besides being likely the most expensive dress you will ever buy, it is the one gown that makes you feel special the minute you slip it on.

Having said all that, it certainly makes good sense to give it a lot of thought and to take your time in making your final choice.

Our top five tips when choosing a wedding dress are: 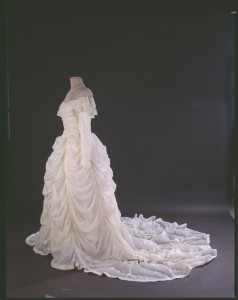 I was recently sent a heart warming story about a pilot in World War 2 who, after a bombing raid on Japan, was forced to bail out of his plane when his engine caught fire. As he had only minor injuries, he used the parachute that had saved his life as a pillow and blanket while waiting to be rescued. After being rescued, he kept the parachute and later when he proposed to his girlfriend, he offered her the silk parachute material to make her wedding gown

His fiancé wanted to create a dress similar to one in the movie, Gone with the Wind, so she hired a local seamstress, to make the bodice and veil and made the skirt herself by pulling up the strings on the parachute so that the dress would be shorter in the front and have a train at the back. The couple married on 19 July 1947
and the parachute wedding dress was also worn by the their daughter and by their son’s bride before being given to the Smithsonian National Museum of American History in Washington.

During the war years, most fabrics were difficult to obtain and I can just imagine the delight of this bride, who by being given all this fabric was able to have her dream wedding dress.

Several people have asked me what exactly was meant by the term ‘trash the dress’.
According to Wikipaedia this is a style of wedding photography, apparently originally dreamt up by an American photographer, that contrasts elegant clothing with an environment in which it is out of place. It is generally shot in the style of fashion and glamour photography.

The idea being that after the wedding the couple get together with their photographer and find creative ways they can be captured ‘trashing the wedding dress’. I’ve seen photos of newly married couples frolicking in the waves, scrummaging in mud and even throwing paint at each other. Some say that it is done almost as a declaration that the wedding is done and the dress will not be used again.
I know I’m not alone in not quite understanding why a bride who has spent hours agonising over choosing the ‘perfect’ wedding dress and then paid a lot of money for it, would want to take time out to ruin it!

We would love to hear your views:
Would you trash your dream wedding dress? Do you agree with this new trend or would you rather give your dress to a charity so that someone less fortunate could also derive pleasure from wearing it or like the parachute dress be environmentally friendly and keep it as a family heirloom? If you have ‘trashed your dress’ was the experience worthwhile and one your would recommend?
Send us an email at info@pamblackweddings.com