Are you becoming a “Bridezilla”? 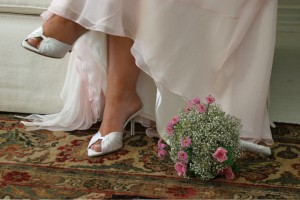 Have you noticed how, in the past few years, the term ‘Bridezilla’ appears to be creeping more and more into conversations when someone describes the unreasonable actions of a bride-to-be?

Sometimes I feel it is used a little unfairly as let’s face it – it’s natural for a bride to let off a little steam occasionally, when the pressure of wedding planning gets too much. However, it is generally when a usually sweet-natured person turns into a monster during the build-up to her wedding that this title is likely to be bestowed on her.

I think we have all known brides who become so obsessed with their wedding planning that they totally ‘lose the plot’ and forget what a wedding is actually all about.

I was interested to read some articles a while ago in both the UK and Irish press about a syndrome that is apparently affecting brides in these countries. TK Weddings, a UK wedding planner had canvassed 1000 brides, and research results showed that many modern brides are suffering from what their company now calls ‘Competitive Wedding Syndrome’, symptoms of which can apparently lead to stress, arguments and overspending.

More than half of the brides interviewed admitted being happy to make sacrifices and overspend in order to have their perfect wedding; in fact many confessed to taking on second jobs just to help pay for the event.

The survey also showed that 59 percent of brides wanted guests to rate their wedding the best they had ever attended, while only 26 percent wanted the occasion to show their friends how much in love they were.

Poor brides! Only 20 years ago, weddings were far less complicated affairs, largely due to the fact that most couples didn’t have as many choices as they do today. Even the simple task of choosing a wedding cake was much less stressful.

Then it was easy: everyone had fruit cakes and all you had to decide was whether to have one, two or three layers! Today, the wide variety of options that ranges from carrot cake to the French croquembouche, with a multitude of chocolate and fruit creations in between, means that what should be a simple task now involves a lot of deciding.

And even once you have finally settled on the idea of a chocolate cake, you then need to decide whether it should be made of white or dark chocolate, or be served with fruit in place of dessert (or perhaps with a chocolate fountain?)

As another example, table decor was also a lot simpler back then, when tablecloths only came in white and overlays and chair-back covers had not even been thought of. And of course there are many more examples, all of which contribute to making the organisation of a modern wedding much more stressful than it used to be.

Adding to the stress is the amount of time needed to plan the big day? I heard somewhere that it can take as many as 250 hours of a well-organised person’s time to arrange the ‘average’ wedding. That translates to nearly six working weeks – not easy when you are working full-time.

Unlike years gone by, when it was traditional to marry at a young age, today’s bride is more than likely to be in her late twenties or early thirties, and no longer living at home. While her mother’s generation were happy to leave most of the wedding planning to their own mothers, the modern-day bride usually has very fixed ideas about what she wants for her wedding. While she will seek out her mother’s help, she often wants to do it all her own way.

So what can you do to prevent yourself from becoming totally obsessed with the planning of your wedding, and/or succumbing to ‘Competitive Wedding Syndrome’?

Firstly, it’s a good idea, right from the start, to set aside at least one day during the week to spend time alone with your fiancé, during which you don’t talk about the wedding at all! Rather focus on your relationship and your life together after the big day. Secondly, try as far as possible to not become a martyr and attempt to do it all yourself – learn to delegate.

Friends and family are always keen to help with wedding planning, as it makes them feel more involved, so accept their offers. Having regular meetings with those to whom you have assigned tasks will set your mind at ease and give you confidence that they know what you require. The last thing you want to be doing on your wedding day is running around, Blackberry in hand, marshalling everyone into action. Don’t laugh – it happens!

Please believe me when I say that, though we might all long for it, there is no such thing as a ‘perfect wedding’. I have been to weddings that were wonderful and many that were stunning, but behind the scenes there were almost always hitches. You might think you have everything planned down to the last letter, but, particularly if you are having a large number of guests, it is virtually impossible (or advisable) to be around to control their every action.

There are also many factors that are completely beyond your control, such as power failures (unfortunately something not unheard of in South Africa), and of course the weather. No matter how much you plan, this is the one thing you really have no control over – which is why it’s wise to have a good Plan B, just in case.

For instance, make sure well in advance that you have a few large golf umbrellas available. Hopefully you won’t need them, but it’s better to have them on hand than to have to run around on the day trying to find some.

Ultimately, though, the secret is simply to feel confident that, whatever occurs, it cannot possibly detract from the joy of this very special celebration. One wise bride told her mother that no matter what disasters occurred at her wedding, she did not want to know about them until after the day!

While at the time it might seem vitally important that the flowers of the bridesmaids? bouquets match those on the main table identically, or that the serviettes are a particular shade of blue, over time these apparently crucial issues fade into insignificance.

I recently spoke to a few couples who had been happily married for more than twenty years and found it interesting that most of them couldn’t remember details such as what flowers they had had, what music they had chosen for their first dance, or what they had eaten on the day, yet often the little glitches that had occurred were what had remained in their minds and made the occasion more memorable.

So when next you feel you are starting to ‘lose the plot’, and before you are labelled as yet another ‘Bridezilla’, take a breather and try to focus instead on the true meaning of the day.

Without wishing to sound too sentimental, it is, after all, about the fact that you love each other enough to want to promise to be together for the rest of your lives, and to show how important the decision is to you by making this commitment in front of all your friends and family.

I have no idea who said them, but I think the following wise words sum it all up perfectly — ‘remember, a wedding is one day; a marriage is a lifetime’.